I have figured out one of the greatest mysteries of the world!

A few weeks ago I went downstairs to switch out the laundry from the washing machine to the dryer only to find all of the water still in the tub of the machine. Great! Just great! I currently rent the house that we live in and the land lord is not exactly the most responsive when it comes to issues with the house. Our deck has been falling apart for years and the closest he has come to getting it repaired is the wood being dropped off at the house only to sit there for over 3 months. It’s still sitting there.

Anyway, back to the washing machine, I have never had anything like that happen before and was dreading having to call the landlord to see when/if he would be able to get down here to figure out what was wrong with it. I didn’t want to have to pay a technician to come out and fix the problem as I was on a tight budget saving for Christmas. So I decided to see if it was something that I could fix myself.

Google to save the day!!!

I went online and used the search term ‘my washing machine won’t drain‘…lol. I figured it couldn’t hurt as a search term. It worked! I pulled up several articles on why a washing machine would stop draining. They all said that there would more than likely be either a clog in the pump or the pump itself being bad. So I took a look at the article here and it didn’t look too difficult to see what the problem was. So I decided to give it a go on my own, I mean the worst thing that could happen would be that I broke it, and it was already broken. HA!

So the first thing that I noticed when I started to gather all the items I thought I would need to fix the washer was that my screw drivers, like many of my other tools, had mysteriously vanished. Having three children I am used to things ‘walking off’ on their own, but when I REALLY need them it’s very annoying to find them missing. So after spending a bit of time in a futile search, I found only my Philips head screw driver and decided to improvise and use a butter knife in place of a flat head. (Which is a great tip if you ever find yourself in need of a flat head with no flat head in sight.)

I went down to the basement determined to make that washing machine bend to my very will and DRAIN!

Now I do need to mention that I have an older washing machine, one of the load from the top kind that has seen many a load of laundry in it’s day. I am not certain that this process would work for a newer washing machine or front loading. Though I’m sure you could probably find instructions on how to fix those as well.

So armed with my MacGyver-ish tools and plan I went to work. I unscrewed the front of the washing machine and set it aside, finding the inside of it to be much less daunting than I had anticipated. I’m not sure why I pictured the inner workings of a washing machine to be a complex mechanism of wires, tubes and who knows what else but it was actually very simple. 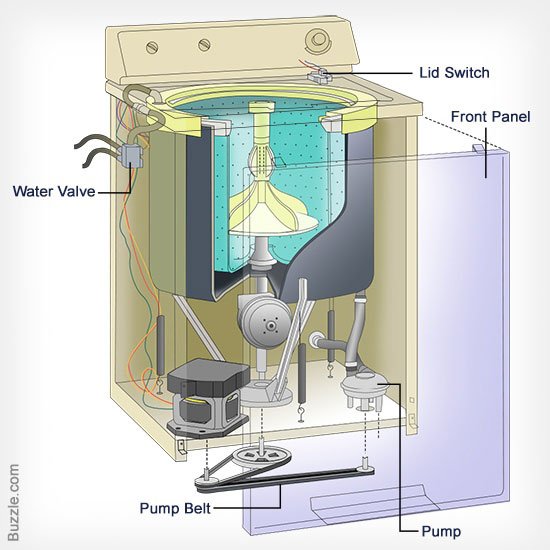 Once I had the front off the washer, I looked at the pump and definitely saw something in there clogging the pump. At this point I was really missing my needle nose pliers (also mysteriously missing) so I wasn’t able to get the item out of the pump with my fingers. At this point I again kicked into MacGyver mode and took a wire hanger and bent it out so that it made a sort of hook. I then used my butter knife to unscrew the clamps that were holding the tubes to the pump. I went to work on the first tube, after unscrewing it I had to wiggle it a bit to get it to come off of the pump. It was at this moment when I realized the other item that I was missing… A BUCKET!

I had completely forgotten that there was a tub full of water in the washer and that hose was directly connected to it. The water started gushing out all over me and the floor. So I quickly reattached the hose and ran to grab a bucket. After looking at the site again I can clearly see the clamp that they have holding the hose clamped shut, so if you have one of those USE IT, if not make sure you have a couple of buckets handy – you will need them. Once I had drained all of the water from the machine, and changed into some dry clothes, I then took my wire hanger hook and started fishing out the clog in the pump.

THIS is where I solved the great mystery that I mentioned at the beginning of the post. The item that was clogging up my pump was one of my daughter’s socks. So for all these years we have always thought that it was the dryer that was eating our socks causing us to have those single lonely socks – but it has been the washing machine all along! The sock clogging my pump was clearly one that did not make it through the pump and out through the hoses to join the other socks in what must be a very large floating sock island in the waterways.

Now once I removed the sock from the pump I reattached the hoses and ran the washer again hoping that simply removing the clog would be all that was required to get the machine back up and running and SUCCESS! Everything was flowing properly again! So I reattached the front panel of the washer and re-ran the load.

Here are the videos that I made of the last part of my escapades with the washing machine!

Fixing the Washing Machine Part 1 (oh and sometimes I call it a dishwasher, not a washing machine – I didn’t have enough coffee in me yet)


Fixing the Washing Machine Part 2 (after I put it all back together).

(I also realized the amount of gunk that had been apparently collecting underneath my washing machine over the years because it all came flooding out when the water came out of the hoses and I had no bucket prepared. YUCK! So cleaning under the washer and dryer has now become part of my spring cleaning list.)