Toxic Masculinity: One Dad Took to Twitter to Defend His Son

A few days ago I was scrolling through my Twitter feed trying, and failing, to ignore the political nonsense that has overtaken literally all social media platforms. I posted some pithy comments and re-tweeted some of the dumbest things that I came across. Realizing that by doing so I was totally contributing to the din, but apparently unable to stop myself.

When I came across a post by a father Twitter handle: @daddyfiles, that caught my attention and made me stop in my tracks. It was a post about his little boy being bullied at school for wearing nail polish. His son LOVES to wear nail polish and one day at school the kids made him feel bad for doing so.

“They called him names and told him to take it off. This lasted the entire day.”

They teased him and said he couldn’t wear nail polish because he was a boy. He came home in tears and told his dad he didn’t want to wear it anymore, even though he loved it.

This dad took to twitter and railed against the toxic masculinity that caused this little boy to question himself and want to stop being who he was. And this dad was PISSED! I read through his entire thread and all I could say was BRAVO!

This is my son, Sam. He’s 5. And today he learned how shitty and harmful #ToxicMasculinity is. My rage meter is spiking right now so excuse me if this is a little raw but there are some things I want to say about BS #gender norms (a thread) pic.twitter.com/NtoE2VHKsU

Seriously, I gave that man a standing ovation in my damn living room. It made my heart so happy to see this father do what ALL parents should do – accept their children for how they are. Could it be a phase? Of course it could. Will he decide later to no longer wear nail polish? Of course he could.

But ultimately this little boy ended up knowing that his father supported and loved him no matter what!

Isn’t that what we as parents are supposed to do? Raise our children to know that no matter how they dress, what they look like, who they love, how they wear their hair – that we will love them. That we support them. 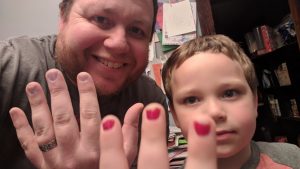 We don’t have to always LIKE what they do or wear BUT they aren’t us and we aren’t them. Giving your child the ability to express themselves (as long as no one is being physically harmed) is so very important. I don’t want my child to grow up hating me because I couldn’t bring myself to approve of who they were at their core.

I would never want to lose a relationship with my child simply because I couldn’t accept their differences. It made my heart happy to see this dad just blast the toxic masculinity that caused his poor little boy to suffer at school.

Thank you @daddyfiles for all you did to support and love your son!

The Pros & Cons of Working From Home