The White House budget director Mick Mulvaney went on MSNBC’s “Morning Joe” program this Thursday to discuss the recently proposed “America First” budget which shows an increase in defense spending and some pretty dramatic cuts in other areas. The most notable being the EPA, Environmental Protection Agency, who are tasked with helping protect our environment and making sure there is a livable planet for our children and great grandchildren. There are many other areas that are seeing cuts such as the Corporation for Public Broadcasting – which funds PBS.

During his interview Mulvaney stated “When you start looking at places that we reduce spending, one of the questions we asked was can we really continue to ask a coal miner in West Virginia or a single mom in Detroit to pay for these programs? The answer was no, we can ask them to pay for defense, and we will, but we can’t ask them to continue to pay for the Corporation for Public Broadcasting.”

And they aren’t just going after Sesame Street and clean air either, the following departments will see cuts as well: 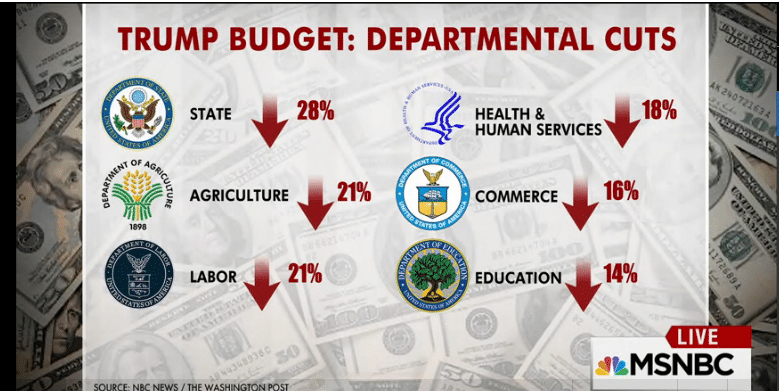 The amount of departmental cuts Trump’s budget is proposing is horrifying and will hurt lower income families in so many different ways. Many of the programs that will lose funding are ones that help feed the elderly (Meals on Wheels) and provide school lunches and after school programs for lower income families. Programs such as the National Endowment for the Arts and the National Endowment for the Humanities will lose funding all while military spending will see an increase of $54 billion. Several billion dollars of that increase are slotted to pay for ‘the wall’.

Now I can’t speak for that “coal miner in West Virginia” but as a single mom in Denver (not Detroit) I can state with great enthusiasm that I would rather pay for almost ANYTHING instead of that stupid ass wall.

I would happily pay for Sesame Street and PBS to continue instead of paying for that wall.

I would rather pay to help low income children and the elderly be able to EAT than pay for that ludicrous wall.

I would rather pay for the people of Flint, Michigan to finally have drinkable water than pay for that ridiculous short sighted moronic wall.

I would rather pay to help teachers (who don’t earn enough money in the first place) and schools provide after school programs for children than pay for that ‘anyone who has a fucking brain knows it’s a stupid idea’ wall.

Hell, I would prefer my tax dollars go to anything that would HELP the citizens of this country, the refugees fleeing terror in their home lands, the undocumented immigrants who want nothing more than a better life for themselves and their families, the low income and the elderly, the disabled and the forgotten homeless than to spend one penny toward that idiotic wall.

The US spends more on defense than China, Saudi Arabia, Russia, the UK, India, France and Japan COMBINED! Why do we need to spend more there when there are children going hungry in our country? When families are losing their homes. When our Veterans are more likely to end up homeless than they are to be helped. When single parents can’t afford child care for their children so they end up stuck on government assistance programs all the while being called ‘welfare queens’ and ‘drains on society’.

No Mr. Mulvaney you don’t speak for me because if you did, you would stamp a big ‘F**K YOU’ on this budget proposal – because it sucks!

Talking Transgender with My Kids – What Do You Say?